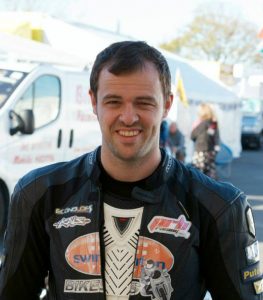 It’s not difficult to see why Rob Barber, the energetic 35 year old from Bury in Lancashire, has become a virtuoso in the racing industry over the past 16 years.  The so-called ‘Bullet’ and his father run race team PRB Racing.  Rob’s father Phil was a mechanic for a race teams in the late 80’s and early 90’s and passed on his avid enthusiasm for bikes to his son…Rob began riding motorcycles at the age of 5!

The story continues in 1999 when the young Rob, battling through championships, won his way to becoming one of the top club racers in country. By 2004, the British Superbike (BSB) National Superstock Series was in sight. The BSB is a first-class, international series, with bikes capable of reaching 200mph and an average of 180bhp, broadcasting as far as Asia.  The dynamic, young rider finished in 6th place on his Suzuki GSX-R1000, a bike which was an ‘ultra fast, capable track missile’ according to Motorcycle News reviews so when it was coupled with Rob’s skills and flare there was no question as to why it earned him a place with Suzuki GB.

During 2005 and 2006 he was riding in the World Superbikes and the GSXR European Cup with a best finish in 4th place and then in 2007, we saw the start of his career in Real Road Racing competing in not only the North West 200 but also the Isle of Man TT (IOMTT), displaying all his thrilling determination.

The North West 200 began in the 1930’s at Portstewart, a small town in Londonderry, Northern Ireland whilst the IOMTT began even earlier in 1907.  Both are steeped in a rich history of the progression of the engineering and technology seen in the motorcycle industry in the past 100 years and the speed records which have been set around some of the most intense and famous real road racing courses in the world.  Sadly, both have their share of tragedy, however, the forming of the Institute for Advanced Motorists (IAM), movements such as BikeSafe, teaming up with major bike names in the industry to promote bike safety and innovative leaps in technology, not just for the public but for riders too.

Rob recorded a 120mph lap in 2008 and finished 20th at the IOMTT Senior Race.  In the same year he was also on the podium as a newcomer at the Dundrod 150, a street circuit part of the UGP in Co. Antrim, Northern Ireland.

Rob became a pioneer of zero emission bikes in 2009.  Zero bikes are electric vehicles with the electricity stored in a rechargeable battery on board, which powers one or more electric motors.  He not only completed the first ever lap around the TT course on a zero bike but won the first ever Zero Emissions Race, the TTXGP, at the IOMTT with an average speed of more than 87mph. That same year he finished 12th at the IOMTT in the Senior Race and also found time to compete again at the Dundrod 150, finishing on the podium. 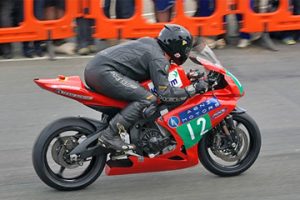 His talents continued to shine and, between 2010 and 2013 and he remained a regular in the Top 20 placement at the IOMTT along with regular top placements in the UGP, even smashing his lap time at the Dundrod 150 Challenge Race in 2013.

With his career roaring, 2014 saw him placing 3rd in the TT Zero Race, finishing on the podium with the legendary Bruce Anstey and John McGuinness and also finishing Top 20 in other TT races with an increased average lap time of 124.6mph.

His experience, character and drive led him to becoming an Auto Cycling Union (ACU) coach for his local club, Preston and District MCC.  The ACU is an internationally recognised National Governing Body for motorcycle sport in Great Britain (excluding Northern Ireland).  It began its long tradition in the sport in 1903, becoming a founder member of the World Governing Body, the Federation Internationale Motocyclisme (FIM).  His energy never waning, he won their overall Club Championship and also the National Superstock 600 and Preston & District MCC 501-1300 Championships.

A trophy Rob was presented by his club in 2015

2015 was a disappointing year for Rob as he was injured for most of the year.  In April 2015, Rob broke his collarbone in two places.  Despite wanting to be fit in time for the Northwest 200 and the IOMTT this was not to be and he passed the mantle on to the incredible talented James Cowton and the Honda CBR 600 RR (at just 22, James is a name to look out for.  His performance in the IOMTT last year was phenomenal and we wish him every success in the future). 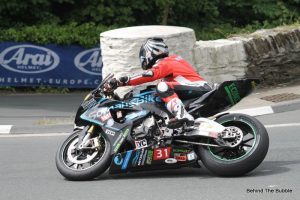 James Cowton at the IOMTT 2015

Rob fought his way back to fitness last summer and travelled to the USA to take part in a collaboration with Ohio State University. One of the Top 20 colleges in the US, Rob was to be the rider for their zero bike, ‘Buckeye Current’, a zero-emission BMW S1000RR, around the Pikes Peak International Hill Climb.  Sadly, during a practice run Rob broke his foot and ended up in hospital again, missing the race.

Buckeye Current’s Send Off to the 2014 IOM TT

We are excited to be sponsoring a dynamic racer with an outstanding career but also such an innovative and pioneering individual, especially in Rob’s racing of zero bikes.  We will be closely following him closely this year as he campaigns towards inevitable successes and cannot wait to see him in action.  So far he will be competing in throughout April in Ireland at the Mid Antrim 150, Tandragee 100 and the Cookstown 100.  June sees him back at the Isle of Man TT and then to the USA for the Pikes Peak International Hillclimb.  We will also see him in the Scarborough Gold Cup taking place in July and finally, the Ulster Grand Prix in August.

We know that 2016 will be Rob’s year and with this line up of races, it’s going to be amazing to watch him…keep following us for updates and videos… 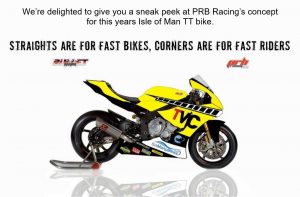