Last time we took an in-depth look at Project PLUTO and the issues surrounding fuel supplies during WWII. In this post, we have investigated specific areas of Non-Destructive Testing and the innovations within them.

During WWII, the German’s developed a magnetic trigger for mines, based on the magnetic field of a vessel passing by. With sensitivity level control, the mine’s detector was designed to go trigger at the mid-point of a large ferrous object, such as a vessel, passing overhead.

Degaussing vessels became a countermeasure to combat this new trigger. On Navy vessels, a system of electrical cables was installed around the ship, covering from bow to stern on both sides. The electrical current passed through them would then cancel out the vessel’s magnetic field and the system could be switched on as and when it was needed. Although this was a reasonably successful system, the specialist electromagnetic indicator loops developed in WWI and installed into harbours, could “see” even degaussed ships. It could also not beat simple visual observations, underwater listening devices and certainly not radar.

Smaller warships and merchant ships were not equipped with full degaussing systems so another technique would be to “wipe” the ship hulls. By “wiping” a current-carrying cable up and down the ship’s hull would temporarily cancel out the magnetic field enough to reduce the threat. This practice started in late 1939, and by 1940 it enabled these vessels to remain largely unseen for a few months until the magnetic field had rebuilt. In fact, a four-day marathon in degaussing many of the boats destined for Dunkirk, displays how effective it was at reducing threats to ships.

The technique known as “deperm” was used for submarines. It roughly equates to the same process as demagnetising a watch – a coil is plugged into an electrical outlet and the watch is slowly moved into the coil and back out again. The watch is then placed near a magnetic compass to see if it affects the compass dials. Obviously, for submarines, these coils must be much larger and provide sufficient room for them to move in and out of the coils with ease.

Interestingly, we also see the beginnings of inspection facilities as specialist ships were developed to operate as degaussing stations. These ships would provide inspection, calibration, and adjustments to the vessels in for degaussing.

A scientist in wartime

In 2005, Vic Taylor’s story was submitted to the BBC’s ‘People’s War’ website. When war broke out, he was 22 years old and has just received his BSc Physics degree. Initially recruited into the military as a gunner, he was reassigned to join the Torpedo and Mining Establishment at Portsmouth with the task of protecting ships against the very German magnetic mines mentioned above and the use of degaussing coils. His story is incredibly interesting and gives a personal look at the role of scientists during WWII.

Radar often comes across as a wholly WWII-years invention, however, both sides used radio-based detection and tracking systems extensively from the beginning of the Second World War and it has its roots in the radio range-finding experiments by British physicist Sir Edward Victor Appleton in 1924. 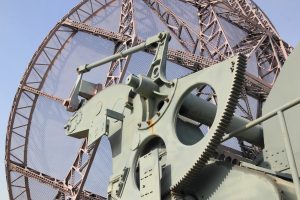 The first practical application of a radio detection and ranging, or radar, system was in 1935 by Sir Robert Watson-Watt. To deduce targeting information, radio waves would “bounce” against an object and then measuring its travel.

By 1939, an entire chain of radar stations has been designed and installed across the East and South coasts of England.

Early radar systems operated at lower frequencies as transmitters for generating sufficiently powerful microwave signals had not been developed. They were still capable of picking up incoming enemy aircraft at a range of 80 miles and played a key role in the Battle of Britain by giving early warning of German attacks.

In 1940, Britain designed a system capable of producing microwave power in the kilowatt range due to an electron tube invented by Henry Boot and John T. Randall, called the resonant-cavity magnetron. The development allowed for more compact, powerful, and sensitive radar units to be produced and these were utilised in aircraft by the Royal Air Force.

This type of microwave radar, known as LIDAR (light detection and ranging), is still used today in communications and in measuring atmospheric pollution.

Interestingly, research not only went into improving the technology but also into trying to jam the enemy radar – Allied bombers were known to drop small pieces of tinfoil during raids in an effect to block signals.

The electronic components had to be robust and reliable but also small. These requirements for radar also laid the path for modern electronics, especially television. Triangulation, a navigation technique using several radars to pinpoint the position of a vessel or plane was also invaluable to the GPS systems we have today.

Before the invention of radar, experimental parabolic sound mirrors were used by the British air force warning devices, detecting enemy aircraft by “listening” for engine sounds.

Although called parabolic sound mirrors, the reflectors are not parabolic, but spherical and direction of the noise source can be detected by moving the sensor rather than the entire reflector.

A network of concrete acoustic mirrors being built across the coast of southern England ended with the development of the radar system. The reflectors had limited effectiveness. Increased aircraft speeds meant little time to engage an enemy from the moment the sound had been detected to when they arrived. Despite this, the methodology of using a network of stations to determine the direction, altitude, and speed of enemy craft was incredibly useful. The network information was given to the early radar developers so whilst the British radar, despite inventing the resonant-cavity magnetron, was less effective than the system developed by Germany. It was the methodology gained from the reflectors that enabled the British radar system to be used more successfully.

Some of the mirrors remain today.

In the late 1920s, more investigation into the relationship between an object’s magnetic field and the direction of a detected surface defect. Discovering that a concentrated high electric current produced a field, A.V. deForest created an inspection method, heading away from the use of permanent magnets.

From these initial discoveries, between the 1920s and WWI, Magnetic Particle Inspection became an inspection discipline and as early as the 1930s, it began to replace the oil-and-whiting method.

During WWII, to ensure that militaries were using quality machinery and parts, reliable inspection and testing became essential and magnetic particle inspection became an effective and reliable method for inspecting anything from railroads to axles, boilers to wheels.

Rooted in electromagnetism, eddy current was discovered accidentally by Hans Christian Oersted in 1820. The research and principles laid out by Oersted, Faraday and Lenz, laid gave us the principles of eddy current but the discovery of the actual technology was by Léon Foucault in 1855.

The first use of eddy current in an NDT setting, to conduct metallurgical sorting tests, was conducted in 1879 by D.E. Hughes. It took until WWII, however, for this discovery to be put to practical use. Predominantly, eddy current research was conducted in Germany during the Second World War and the technology was adapted for developing instruments measuring conductivity and sorting mixed ferrous components by Professor Friedrich Förster.

Portable X-ray equipment was available to the British army by 1939 and could be used for both radiography and fluoroscopy. Although there were professional radiologists and education system in the subject by the 1940s, operators during WWII were often in short supply. Many army units abroad were simply presented with the equipment but not an experienced user to go with it.

X-ray machines were used to review casualties, look for foreign bodies and even radiotherapy for infections such as gangrene. Unfortunately, X-ray users were not only subjected to radiation in the field but also could be electrocuted by the equipment – safety shock proofing was not available at this time!

During WWII, UV interior lighting replaced radium-painted instruments in American, British, Japanese and German planes. Not only would it help with night and all-weather flying, but the intensity could also be varied, the low illumination would not give away the aircraft’s position and, all in all, it was far safer than radium! In fact, charts were marked in UV-fluorescent inks, and UV-visible pencils and slide rules were utilised too.

Invisible ink was first mentioned by Aeneas Tacticus in the 4th century BC in discussing how to survive a siege, it part of a list of different methods of secret communications. One technique mentioned in his book, “On the Defense of Fortifications”, involved spelling a secret word by puncturing a tiny hole above or below the letters in a document. Whilst no ink is used in his method, the German’s improved on it during both World Wars, using invisible ink and microdots instead of small puncture marks.

During WWII, solutions of phenolphthalein, a compound extracted from constipation medication, was used. Although colourless, when exposed to ammonia or bicarbonate of soda, it would turn pink

A British training manual from WWII listed the properties of the ideal invisible ink as:

Invisible inks were used as a back-up when other securer communication options were unavailable, and operatives were supplied with suitable inks rather than them need to improvise in the field. If they did have to improvise, they were instructed to dilute the makeshift ink as much as possible to reduce the chances of its detection.

Ultraviolet germicidal irradiation (UVGI) uses short-wavelength ultraviolet light (UV-C) as a disinfection method. Since the late 1800s, in the form of germicidal lamps, it has been used to kill microorganisms which cause indoor air quality problems such as bacteria, yeast, mould and viruses but also the treatment of water.

Niels Ryberg Finsen first utilised UV rays in treating disease and the first commercial UV-C germicidal lamps were developed in the 1930s and were used by hospitals throughout WWII.

An interesting analysis of the coatings on a Horten Ho 229 V3, a German prototype fighter/bomber, found 17 different surface treatments on both wood and metal components. For the full analysis, visit the Smithsonian National Air and Space Museum, here.