It was November 8, 1895 and in a dark room, a man with a cathode tube sealed in a light-blocking case notices that despite the tube being covered, it was emitting a small amount of light, from a couple of meters away a piece of barium platinocyanide coated paper began to fluoresce.  In this moment, the history of radiography was born; that man was Wilhelm Conrad Röentgen and he had just discovered a new type of light ray.

He continued his testing of the rays by placing different objects of varying thicknesses in their path.  He recorded them on photographic plate and in one of these tests, decided upon using his wife’s hand, although this may be anecdotal.  The developed plate showed the shadows of her bones but the flesh was much fainter.  The rays were new and penetrating; he believed they were produced by the cathode rays impacting with material objects.  More research would eventually show that this was the case and that the nature of these rays are only different from the electromagnetic nature of light in the higher frequency of their vibration.  Still, as their nature was unknown at the time, Röentgen called them X-Rays. 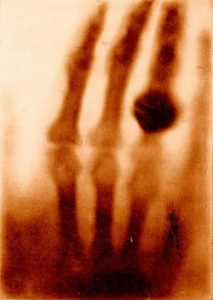 The impact of this discovery has been phenomenal. Röentgen published his findings in ‘Über eine neue Art von Strahlen’ (On A New Kind of Ray) and almost immediately they were applied to medical imaging.  For his discoveries he earned not only an honorary medical degree but also the ever Nobel Prize in Physics in 1901 and thus became the ‘Father of Radiography’.

It was bare months before the first medical X-Rays were used.  They were discovered in 1895 and by February 1896 the US institute, Dartmouth College, was using them to diagnose a broken limb.  Despite this however, initially, the majority of people saw X-Rays as a form of entertainment – you could go to a Bone Portrait Studio and get an X-Ray photograph of a body part to hang on your wall.  In fact, you could even get a hand-held fluoroscope to use at home as long as you had access to a cathode tube!

X-Ray photos were very difficult to take in the beginning as the rays were unfocussed.  The cathode tubes were very inefficient partly due to the placement of the cathode and anode.  The anode was placed centrally at the bottom of the glass chamber and the cathode in the middle at one end.  If the negatively charged cathode rays managed to reach the positively charged anode, they went off in all directions and were unfocussed.  This meant that taking a photo could take a fair amount of time and required the patient to sit still throughout.  There were first changes to the anode which was moved directly opposite of the cathode and rather than remaining a disc, it was angled so the rays bounced off at a set point.  The cathode was then changed from a disc to a heated coil enabling it to produce more electrons.  The amount of electric voltage sent to the cathode will determine whether the X-Ray is strong or weak and the amount of current allows more electrons to be produced.  Finally, the anode was again redesigned due to an issue with pitting.  All of the energy from the cathode was impacting on the same area of the anode which was causing the pitting and therefore spreading the X-Ray’s and not allowing them to be focussed.  A rotating and angled anode was devised so that the heat energy from the cathode was not impacting at the same place on the anode.

X-Rays have been used in diverse fields such as in manufacturing, for example, to detect structural defects and even in genetics!  Rosalind Franklin used X-Ray diffraction to examine the DNA molecule and in 1953, Watson and Crick also used it to define the double-helix structure of the DNA molecule.  In the health services today X-ray investigations are commonly used for all types of conditions from bone fractures and breaks to non-cancerous and cancerous bone tumours to pneumonia, lung cancer, heart failure and breast cancer.  They can also be used by surgeons during operations or to guide catheters.  In some cases the flesh may need to be seen clearly so will involve the patient taking a contrast agent, including swallowing barium which highlights the upper digestive tract; barium enema; angiography, where iodine is injected into a blood vessel which highlights the heart and blood vessels and intravenous urogram (IVU) where iodine is injected into a blood vessel to highlight the kidneys and bladder. 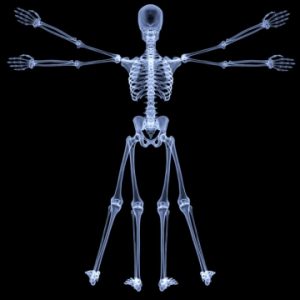 Even now his innovation is guiding us to more complex uses of X-Rays.  A group of French and Germany scientists have created a curved waveguide which is able to significantly bend the X-Rays without losing too much of them through leakage into the background.  This could lead to higher resolution images and particularly useful to the area of Interferometry – 120 years on and his ingenuity is still being used throughout the medical world and is continuing to inspire scientists to create ever more detailed imagery and further uses for the ‘röentgenogram’. 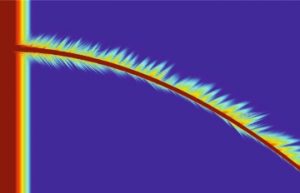 The bent X-Ray created by a curved waveguide

Although he was widely known for his work with X-Rays, there was much more to Röentgen than people realise.  During the 1860’s Röentgen began his university studies in Mechanical Engineering and studied under Rudolf Clausius and worked at August Kundst’s laboratory.  Clausius is considered to be one of the founders of thermodynamics science and Kundst developed a device used for the measurement of the speed of sound in a gas or a solid rod, the Kundst Tube, although today it is only used to detect standing waves and acoustical forces.  Both of these men were of inspiration to Röentgen and influenced him greatly.

Röentgen’s first paper, dealing with the specifics of heats of gases, was published in 1870.  He followed this with a paper on the thermodynamics of crystals.  He explored so many phenomena including the spread of oil drops on water; the characteristics of quartz, in particular the electrical characteristics; pressure influences on how light and other radiation propagate various fluids and how polarised light planes are modified by electromagnetic influences, to reference just a few, and even built many of the apparatus he used!  His studies culminated in him becoming a lecturer and, after refusals at many institutes, in 1900 he finally accepted the Chair of Physics at the University of Munich where he remained for the rest of his career.

After Note:  Whilst researching and writing this piece my first thought was ‘Wow, what a guy’. For those of you who don’t know the reference, check out the short BBC video of ‘Ace Rimmer’ in the hit show ‘Red Dwarf’ by clicking the picture below… 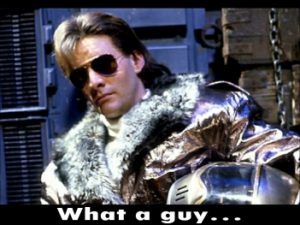 https://www.nlm.nih.gov/ (US National Library of Medicine)